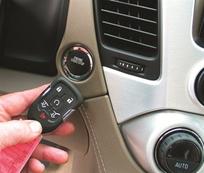 When you think of technology, one did not usually think of car keys. The basic car key had a long metal shank that had cuts and grooves in it. If you lost it, you could a get a replacement key at the hardware store or a local locksmith for about $3-5. Unfortunately, that ease of replacement also made it easy for car thieves to steal your car.
On most modern cars, the key has an electronically coded computer chip implanted in its plastic base and or sensors that require codes to match up in order to start the car.

There are several types of car keys, some of which are highlighted below.

A valet key starts the ignition and opens the driver's side door, but prevents the valet from gaining access to valuables that are located in the trunk or the glove box. Some valet keys, particularly those to high-performance vehicles, go so far as to restrict the engine's power output to prevent joyriding.

Most modern cars have this type of car key, which has a computer microchip embedded in a round plastic body.  The microchip responds to a radio signal sent from the car’s computer when the key is turned in the ignition. The computer chip is programmed to send a coded signal back to the car's computer in order to start the engine. If the code is incorrect, the engine will not start. Many cars will shut down if the wrong key is used.

Smart Keys are not really keys. They are FOBs that are either inserted in the dash or carried on your person or in your purse. The driver turns the car on and off with the press of a button. They use computerized microchips and sensors to open and start a car without using a key. All that is required is to have these keys in person and your car will unlock and start because the key is close by.

A smart key's main form of security is its ability to use rolling security codes. The system randomizes the correct code and prevents thieves from hacking it through the use of a device called a code grabber. The vehicle's computer recognizes the code emitted by the smart key and verifies it before starting the engine.

Cars keys provide security to our cars and the items that we keep inside. With modern transponder keys and keyless systems, it can be expensive to replace your key if you lose it. These keys need to be programmed to your car. If you do lose your key, Automotive locksmiths usually have the equipment and expertise to replace it or can advise you on the best method available.